Data compression is a very broad topic, we may find lots of materials on this topic on Internet. There are amazing benchmarks for all kinds of compression algorithms. Benchmarks 1 2 3 for Java exist, but it seems to be a little bit outdated (not using JMH, for example) as it was written a long time ago.

Compression effectiveness (both performance and size) is dependent on the actual data. Therefore, it made sense to me to redo benchmarks to determine which algorithm (if any) will fit the most, and just learn a bit more about data compression in Java.

What data do we benchmark

We are going to benchmark on two sets of data: our internal data structure of different sizes and a set of artificial randomly generated data with different compression ratios and sizes.

An internal data structure is a kind of trie with URLs, UUIDs and some other binary information (encoded as protobuf messages). We can’t share the data itself as may contain some user data.

For the Real dataset the best compression ratio had brotli, the worst snappy and lz4 fast: 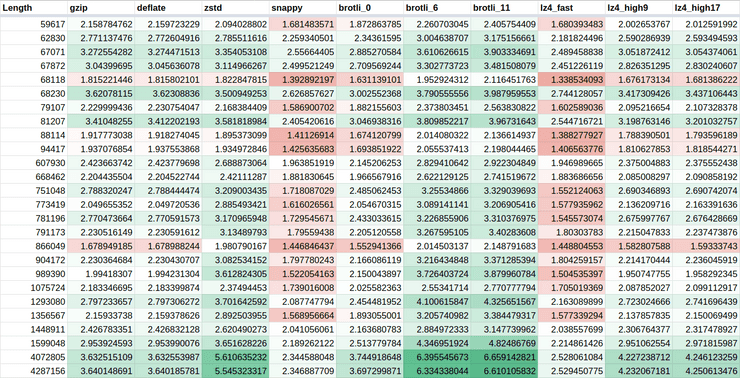 For the Stub dataset (random) the best is brotli and the worst consistently lz4 fast.

A spreadsheet with all compression ratios is available here.

Benchmarks were performed using JMH for 3 JDKs: openjdk-8, openjdk-11 and openjdk-17. If not mentioned separately, the charts are for openjdk-17.

First, let’s see the performance of decoding for the Real Data (data length is between 600KB and 4MB):

Another view for this chart would be throughput in bytes per second:

From these charts it’s clear that lz4 (all 3 levels) outperforms significantly all other algorithms. The next after lz4 fast are zstd and snappy.

Next, let’s check encoding performance for the Real Data (data length is between 600KB and 4MB):

Wow! Brotli with level 11 took 13 seconds to encode 4MB of data… At first I didn’t believe it, thought that I must be use the library incorrectly. But then I ran original native binary:

Indeed, compression level 11 is extremely slow. Let’s exclude it to see normally performance of other algorithms:

And the corresponding chart for the throughput (bytes per second):

And comparing performance in different JDKs we may see that performance is more or less the same as most libraries use JNI under the hood:

And the same for encoding:

Looking at throughput graphs it seems that lz4 fast compressor is a very decent alternative for snappy, when compression ratio is not very important. Decoding is faster:

As well as encoding:

However, this benchmark doesn’t take into account the IO limit of the system: network/disk throughput is not infinite, so the compressor is not going to work on its best performance. I tried to emulate IO limit, but it doesn’t seem to depict the reality. And for that I’m going to run another benchmark soon…

Gzip and deflate have 12 bytes difference in header/footer sizes. Apart from that gzip uses deflate to compress data. But, there is a performance difference between them!

This is very strange, because under the hood, both deflate and gzip use Inflater/Deflater classes from JDK.

As I mentioned before, MySQL Compress is deflate plus size of the uncompressed input. This size (extra 4 bytes) allows to allocate buffer precisely on decoding, which may save few allocations and memory copy. And it’s something that we actually see on a graph:

This optimization indeed helps a lot.

Brotli is supposed to be more efficient replacement for deflate/gzip. And it’s :) From the performance standpoint, brotli with compression level 6 is generally faster than gzip/deflate. After certain size (in this benchmark somewhere between 20K and 30K) brotli performs significantly better:

The same goes for the encoding, but threshold is even smaller (around 3K-4K):

There are 3 libraries for Java:

dec library allows only decompression (it’s used for decompression only in commons-compress). I decided to benchmark it, and results are very sad:

lz4 is supported in commons-compress. A short benchmark showed that its more than 1 order of magnitude slower than org.lz4:lz4-java that is used in the benchmark.

Even though the results of the benchmark look promising, I am not fully convinced that I will see the same level of performance in a real-life application: I briefly mentioned that IO limit of network/disk is hard to emulate, so it’s hard to predict how it will behave.

Another interesting point for me is that artificial data (random) shows more or less the same trends for compression algorithms, but the real data is decompressed faster for the same compression ratio (lz4 level 17 for real data ~69 usec vs ~88 usec for random data). So, it’s important to benchmark on the real data samples if possible.

Play with charts here. Source code is on GitHub. Originally posted on Medium. Cover image by indoposter from Pixabay.