It’s common to use JSON as the main format of serialized data. It’s very convenient to use it both on client and server. Obviously, it’s not the best choice in terms of both data size and performance.

This article mainly focused on data size/performance of binary serialization libraries for Scala. Java versions are used just to compare with.

Protobuf is small and fast. Scala’s implementation — ScalaPB — is robust and convenient. Both for many small and big messages.

Many performance tests suffers from a synthetic nature of data. This test is not an exception, but here I test existing almost-production like data models (simplified a bit, of course). One case is a rich DTO (data transfer object), the second one is a list of small events from which a rich DTO could be reconstructed.

I chose several libraries for a testing:

For Protobuf and Thrift, I also used Java implementation to check compatibility and performance with the original. Also, I added to comparison a default Java Serialization (Serializable interface + ObjectInputStream).

All libraries I checked against well-known JSON serialization library — Jackson.

It’s worth to mention couple libraries, that I decided not to include a comparison:

Also, I want to promote an interesting research — JVM Serializers. It’s a good starting point to pick your serialization library.

I tested libraries against two types of data objects:

A rich DTO consists of several fields with simple data types (UUID, dates, strings, etc) and nested lists of other rich objects (without back-references). Also, there are couple rich objects with subclasses (see an example of EntryPoint).

I’ve implemented as simple as possible event model for building Site snapshot (as if it was event sourced). All events are very small, represents a single change in a model (very granular):

Events come as a sequence, ordered by a timestamp. For example, in MySQL, it could be stored in such table:

An example of how to reconstruct a Site from events (EventProcessor):

Events are produced from these 5 objects: 1k events are events from which may be reconstructed a 1k object, etc.

BooPickle is the leader (and this is understandable — this library doesn’t support backward compatibility, so, they don’t need to save field tags). Chill demonstrates better results for the very big object. Thrift is not so good (maybe, it’s because of implementation for optional fields).

Sizes (in bytes) for events (sum for all events in list):

Another interesting topic about data size is the compression. A compression is widely used in modern systems, from databases (i.e. “compress” row format in MySQL) to networks (GZip over HTTP). So, the data size could be not so important to look at. The comparison table for gzipped and raw object are pretty big, I will show a small part (an entire table available here).

Important note: events are gzipped not together, but one by one, of course, if it would be gzipped together, result size would be much less. It shows an importance of choosing the right storage/transfer mechanism.

We may see, that on small objects (less that 2k) protobuf has almost the same size as gzipped JSON (so, we can save some CPU cycles).

The next important thing is the performance of serialization and deserialization (parsing). Our tests are about serializing/deserializing the raw data to Scala objects. In order to simplify this testing, I converted generated classes to “domain” classes, so, for protobuf and thrift there is also an addition of object conversion (I don’t think that the effect of this addition is significant).

I excluded Java Serialization and Pickling from this chart (and other charts also) because both of them are very slow. I will write about it afterward.

The code for the performance tests is in BasePerfTest.scala.

On the following chart you may see the serialisitezation times for Site object (measured in nano-seconds with System.nanoTime method). 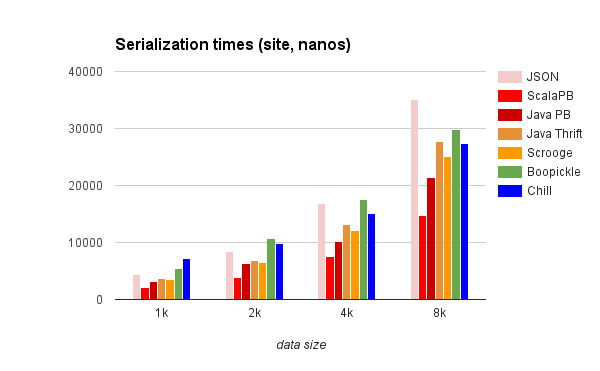 ScalaPB is the pure winner, Java protobuf and Thrift goes after. BooPickle and Child are slightly slower for “small” objects, and a bit better for bigger objects.

The next chart is serialization times for events. 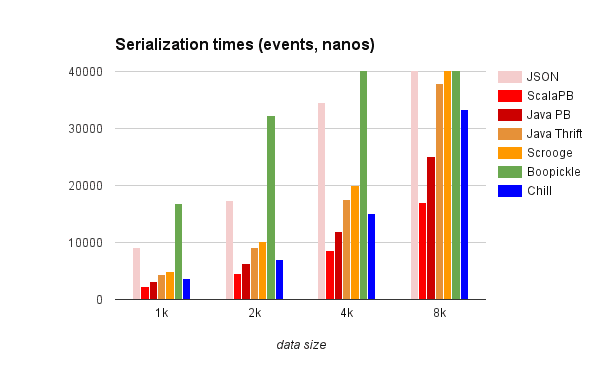 ScalaPB still is the winner. BooPickle is very slow in this contest. Apparently, many small messages are not the proper scenario for it.

The next chart is deserialization times for Site object: 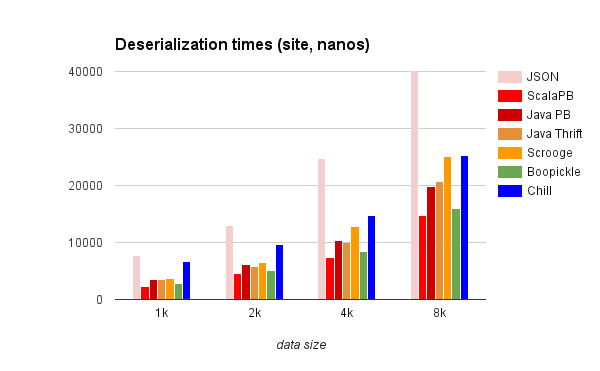 ScalaPB is the winner. BooPickle looks much better, apparently, there are many optimizations during the serialization that costs a lot. 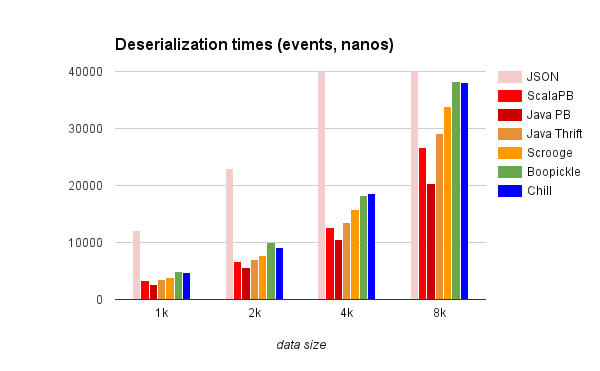 For events, the fastest library is Java Protobuf (I don’t know why, but it confirmed after several runs).

Pickling performance is surprisingly bad. I think I missed something and did it wrong (I used all tips from its manual), but Pickling is the slowest library in this test.

Just to compare its performance. Serialization of a rich DTO:

Deserialization of a rich DTO:

Nevertheless, performance and data size are not enough to make a decision to move from using JSON to protobuf. But, it’s important to know how much does it cost.